Orycteropus Afer over on Aardvark Alley has some great daily posts for feast days and commemorations, especially as regards people important to the history of the early Church and the Reformation.  Today happens to be the commemoration of King Gustavus II Adolphus of Sweden, who fought valiantly during the Thirty Years’ War “so that the Lutheran Reformation might live.”  He left his mark on Germany and northern Europe during the war, not only extending Sweden’s world-influence (the Swedish Empire became a world power under Gustavus Adolphus’ reign, and stayed so for about 100 years until the Karl XII’s defeat at Poltava at the hands of the Russians under Peter the Great), but also making great gains for the spread of Lutheranism in Germany and elsewhere in Europe.  Orycteropus has put up a nice biography of “der Löwe von Mitternacht”, as well as suggested readings for his commemoration.  Read a selection from the commemoration after the jump:

Gustavus Adolphus pioneered the use of fast-firing musketeers and extreme mobility of troops and flexibility in engagements. His artillery was much more mobile than others’ and he treated all branches of his army equally, refusing to favor cavalry over infantry or musketeers over pikemen. Indeed, he cross-trained as many of his soldiers as possible, so much of his infantry could ride and his pikemen could also use muskets.

Yet we Christians, in particular we Lutherans, most of all remember and give thanks for a man who used his intellect and leadership in political and military defense of the religious gains of the Reformation. And while not all in Sweden, Germany, or elsewhere continue to staunchly believe in justification by grace through faith, or to trust in Scripture’s veracity and the truth of the Lutheran Confessions, it’s nowhere the fault of godly King Gustavus Adolphus Magnus.

Almighty and everlasting God, who kindled the flame of Your love in the heart of Gustav Adolf, who inspired his kingship under Jesus, the King of kings, and who led him to bold confession and humble service, grant to us, Your people, like faith and humble service, that we who rejoice in his triumphs may profit by his example; through Jesus Christ our Lord, who lives and reigns with You and the Holy Spirit, one God, now and forever. 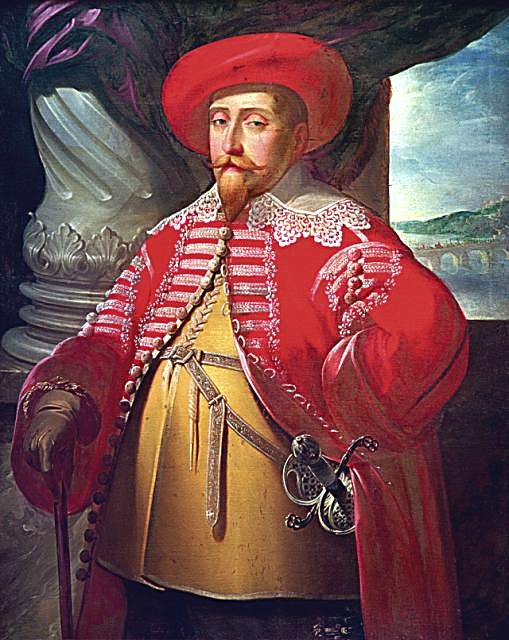 Art I’ve used in my posts:

The Pelican Window at Emmaus Lutheran Church, Dorsey, Illinois. (We have since determined that this is the Passion Window, but I still think it is a good image of the Christian life and I’m sticking to it!)

While an apocryphal story, as it goes, St. Nicholas of Myra was apparently fed up with Arius’ nonsense at the Council of Nicea and gave him a slap to the face. Image: Public Domain via www.aleteia.pl.

“Pentecost : The sending of the Holy Spirit upon the Apostles” from the Hortus Deliciarum (1180) by Herrad of Landsberg (1125-1195). Public Domain.

“Christ teaching the disciples the Lord’s Prayer” (1550), by Hans Brosamer (1495-1554) from the 1550 Frankfurt Edition of the Small Catechism of Martin Luther. The British Museum. Public Domain.

Whenever I think of the suffering of Christ, I am always drawn to this illustration from the sainted Rien Poortvliet’s He Was One of Us (Baker Academic, 1974). Poortvliet really captures the unimaginable depth of sorrow experienced by Christ, the existential anguish that you and I can’t even fathom. And he bore it all for us.

“Entry of Christ into Jerusalem” (ca. 1150), by the Master of the Capella Palatina in Palermo.

“Entry into Jerusalem; Christ (played by Anton Lang) and John, with donkey; at the Oberammergau passion play, Bavaria, Germany, 1900.” Library of Congress.

Detail, “Parable of the Fig Tree” (1430). Koninklijke Bibliotheek, The Hague.

Azulejos depicting the Parable of the Barren Fig Tree in Cloister of Mosteiro de Santa Cruz, Coimbra. Photo by Joseolgon.

An etching by Jan Luyken illustrating Luke 13:6-9 in the Bowyer Bible, Bolton, England.

“Crucifix in a Classroom at Concordia Seminary” (2017) by Nils Niemeier.

The only known portrait of Patrick Hamilton, painted by John Scougal (1645-1730).

“The Triumph of Christianity over Paganism” (1868?) by Gustave Doré (1832-1883), The Joey and Tobey Tanenbaum Collection, Art Gallery of Hamilton, Ontario.

“The Baroque painting depicting the present patron saint of the church, St. John the Baptist, is in the sanctuary of the Church of the Cherkess. His painter is unknown.” Wikimedia Foundation.

“Adoration of the Shepherds,” Matthias Stomer (1632)

Melanchthon, by Lucas Cranach the Younger

“He who…and let him take up his cross and follow behind me.”

The author’s own stab at copying the Nativity scene depicted in the Hortus Deliciarum (ca. 1180).

“The Parable of the Vineyard” (11th Century) from the Codex Aureus Epternacensis (f76f). Public Domain.